Samsung has come out with a new portable and secure solution for productivity types that need to take their data with them on the road. Meet the Samsung T7 Touch Portable SSD. The T7 Touch comes in 500GB, 1TB and 2TB, sporting an aluminum unibody and weighing a feather-like 58 grams. That body is designed to withstand drops from up to 2 meters and is backed by a 3-year warranty.

The SSD is also ultra-compact, measuring at 85mm X 57mm X 8mm (3.4 x 2.2 x 0.3 inches). That is practically the size of an 8mm thick credit card. However, one of the cooler features of the Samsung T7 Touch is its ability to protect your data, which is unlocked by your fingerprint.

Samsung’s T7 Touch SSD uses AES 256-bit encryption to protect the data you store on it. You can opt to protect your data with either up to four fingerprints or a password. You start by installing Samsung’s free Portable SSD Software for Windows, Mac or Android. You then connect the T7 Touch SSD to your device, teaching it a password and up to four fingerprints, should you choose to go the fingerprint unlock route. The password setup is required whether you decide to use fingerprint unlocking or not, so that you have last resort for accessing your data. 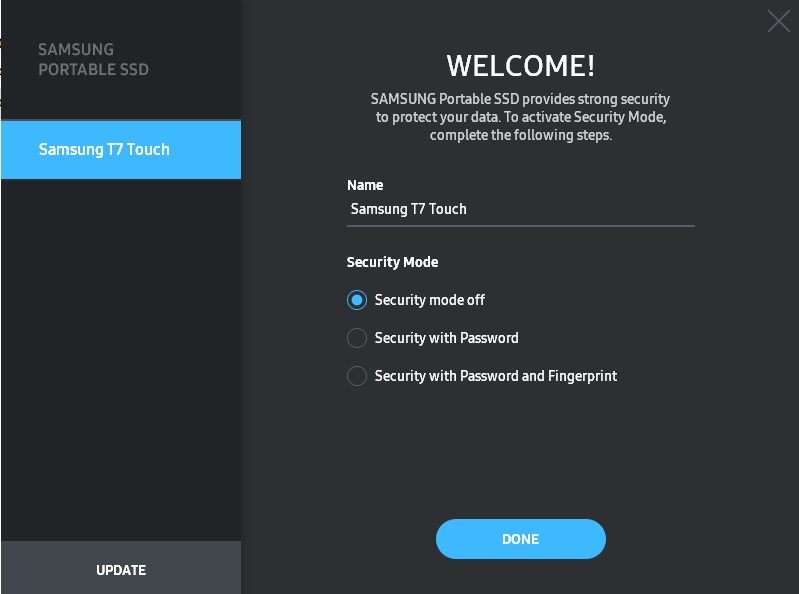 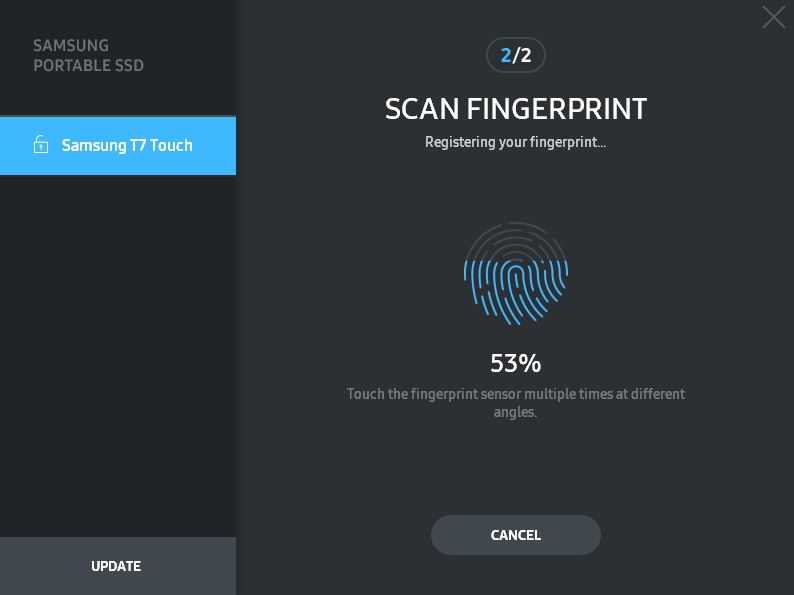 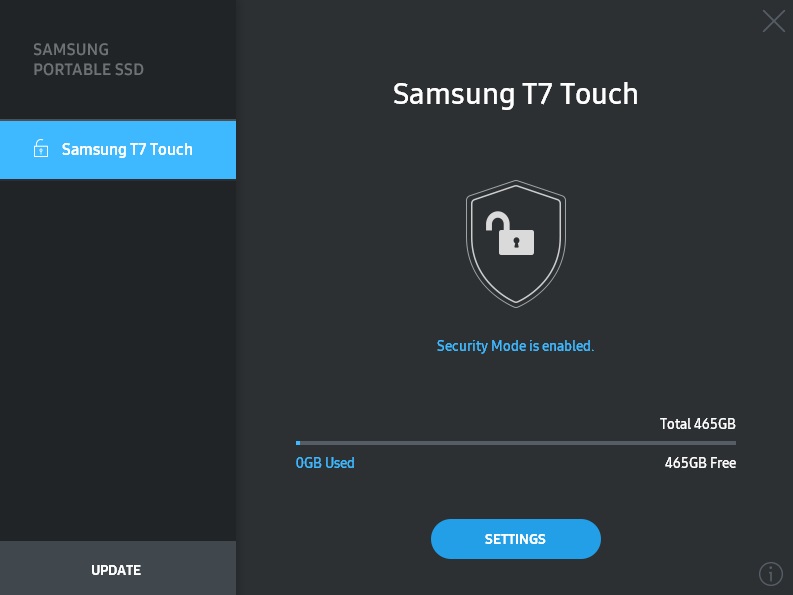 Once configured, you are to free to connect and use the Samsung T7 Touch on a PC, Mac or Android device, even if that device does not have the Portable SSD Software installed. Whenever you connect the T7 Touch to a device, your access is restricted to a read-only partition. Without unlocking the T7 Touch, users only see an install file for Portable SSD Software (Windows) and a couple of txt files, with one of the files telling you that you are looking at a read-only partition.

However, as soon as you rest a valid fingerprint on the T7 Touch’s sensor, the SSD immediately disconnects and reconnects, this time showing you all of your stored data and giving you free reign to read and write as you please.

The unlocking is quite fast, displaying your secured data in about three seconds or less. Once unlocked, you are free to use the T7 Touch as you would with any other external drive.

The T7 Touch SSD is impressive in its performance as well, using USB 3.2 (Gen2) connectivity with embedded PCIe NVMe technologies. This allows the T7 Touch to tout read/write speeds of up to 1,050/1,000 (relatively) MB’s per second, depending on the configuration of the device you have it connected to.

As far as transfer speeds went with our usage, the Samsung T7 Touch performed well as a portable storage companion. Timing was perfect as I was about to upgrade from a Samsung Galaxy S10 to a Galaxy S20 5G. I thought that it was a good as time as any to back up all of the pictures, videos, and music that I had stored on my S10’s expanded microSD (200 GB SanDisk microSD XC I). So, I connected the T7 Touch to my S10 and prepared to copy over 6928 files, sizing up to roughly 37.21 GB.

The 37.21 GB of files transferred in 9 minutes and 4 seconds. That summed up as a transfer rate of a little over four GBs per minute. Not bad at all from a phone transfer.

I then tried a transfer of 46.6 GB of movies between the SSD and a Dell XPS 15. To get a little granular, the Dell was spec’d out as follows…

Transfers to and from the PC and SSD were practically the same, where I was able to move 46.6 GB of files in 2 minutes and 58 seconds. That sums up to a rough and rounded-up transfer rate of 16 GB per minute.

Overall, the T7 Touch got the job done at some impressive speeds for the devices we threw it at.

The Samsung T7 Touch Portable SSD became a solid productivity and travel companion that I did not know I wanted or needed. It comes in 500 GB, 1 TB and 2 TB storage options while remaining ridiculously compact and delivering solid transfer rates. In the off chance that I lose the SSD, I had some reassurance that my data would remain secure thanks to AES 256-bit encryption. With the fingerprint unlocking being such a focal feature of the T7 Touch, it was refreshing to see that unlocking the SSD was both fast and easy.

† As usual, there are no affiliate links contained within this post. We were provided a Samsung T7 Touch SSD (500 GB) for review purposes and were not compensated for this review.