There are plenty of portable charging and protective case options out there for the Nintendo Switch. However, it is always a treat whenever we get to try an accessory has an angle on the rest, whether it be through functionality, efficiency, or even price. The HyperX ChargePlay Clutch for the Nintendo Switch we saw at CES 2020 is definitely one that tickled our fancy. It is part case, part stand, part battery, and part controller grip.

Weighing in at 400 grams and housing a 6,000mAh battery, the HyperX ChargePlay Clutch for the Nintendo Switch plugs into your console via USB-C. A flap on the top snaps down to hold the console securely into the case. Keeping heat dispersion in mind, the flap has openings that allow the Nintendo Switch’s vents to exhaust air freely. 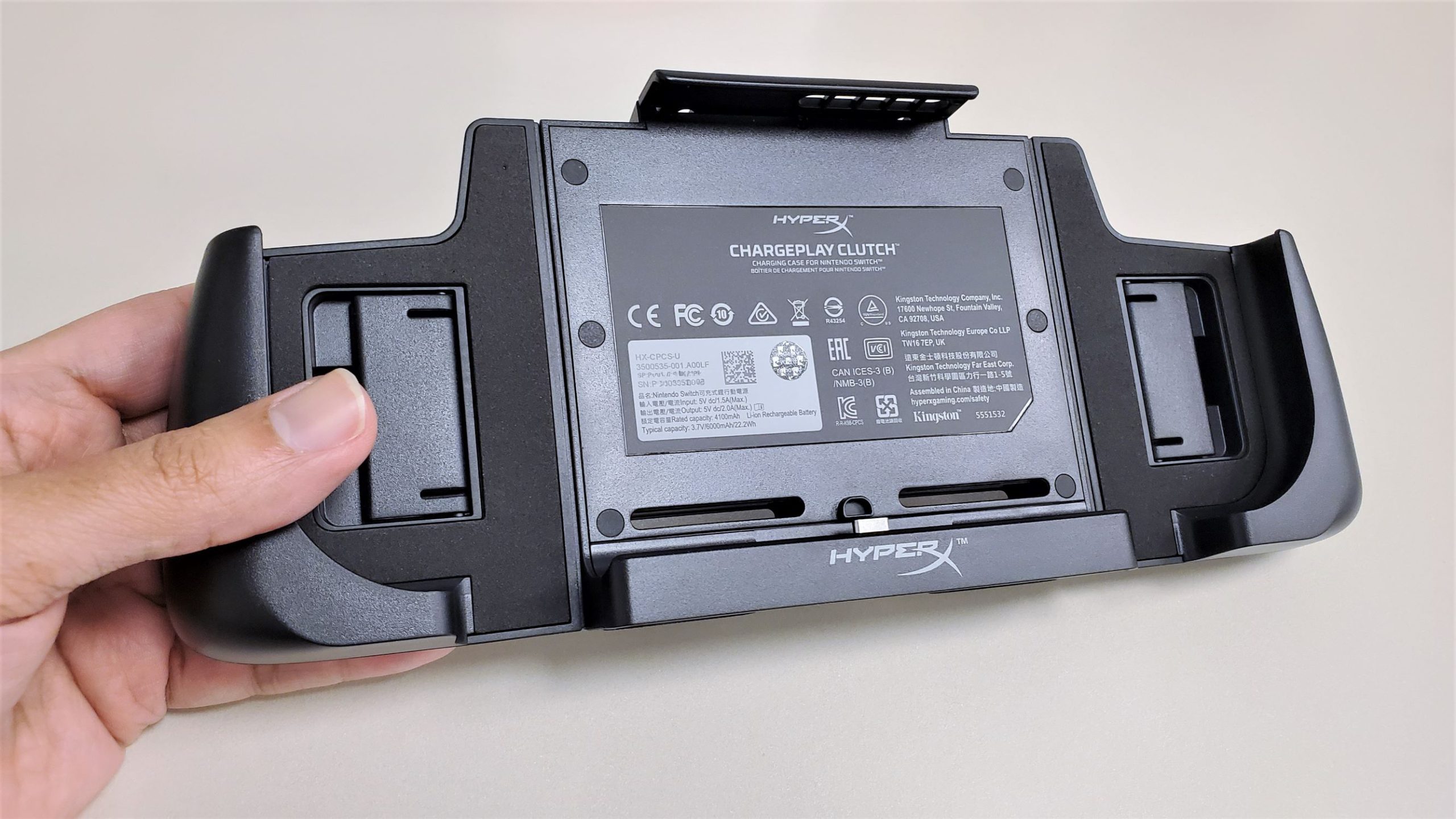 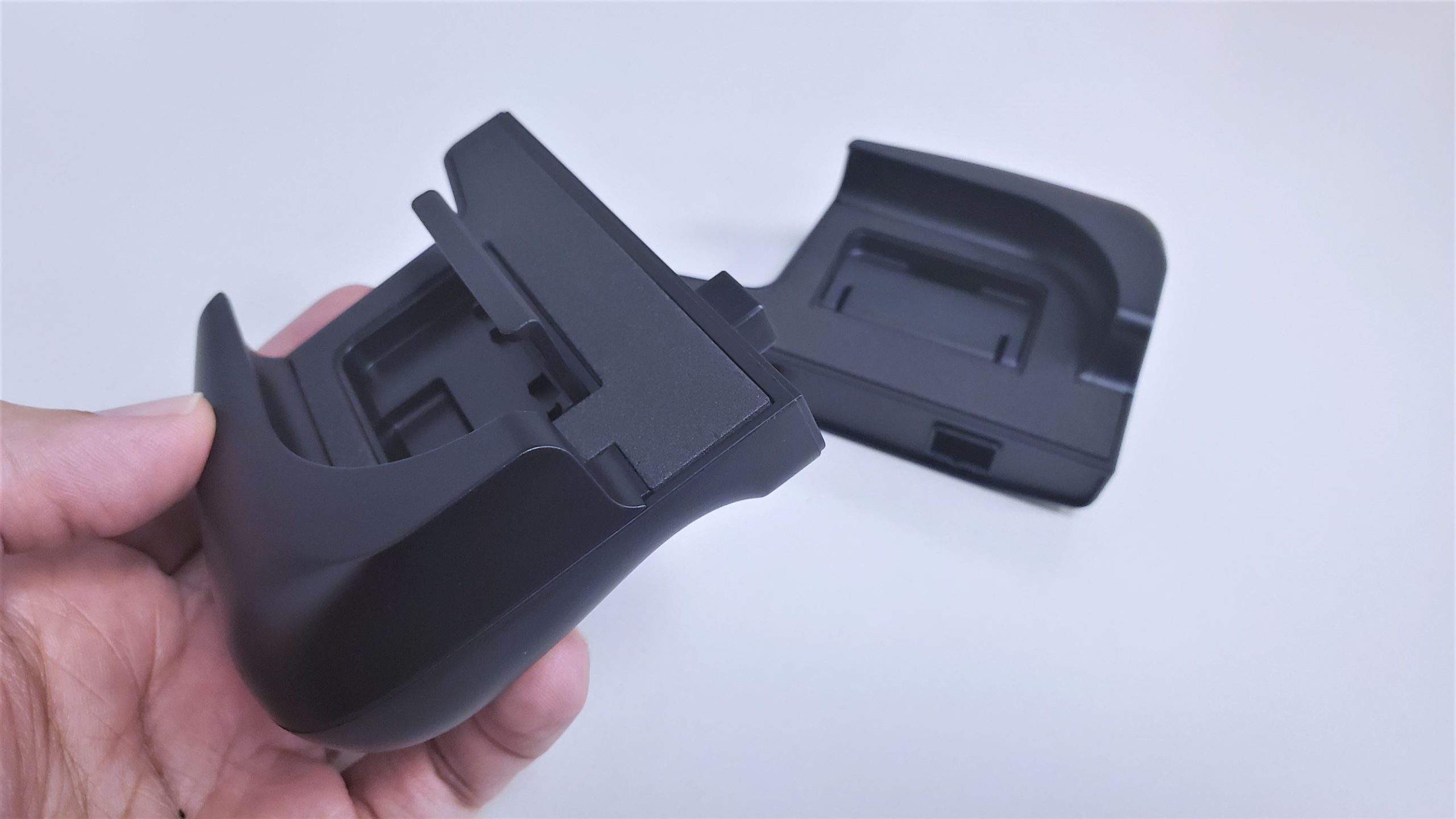 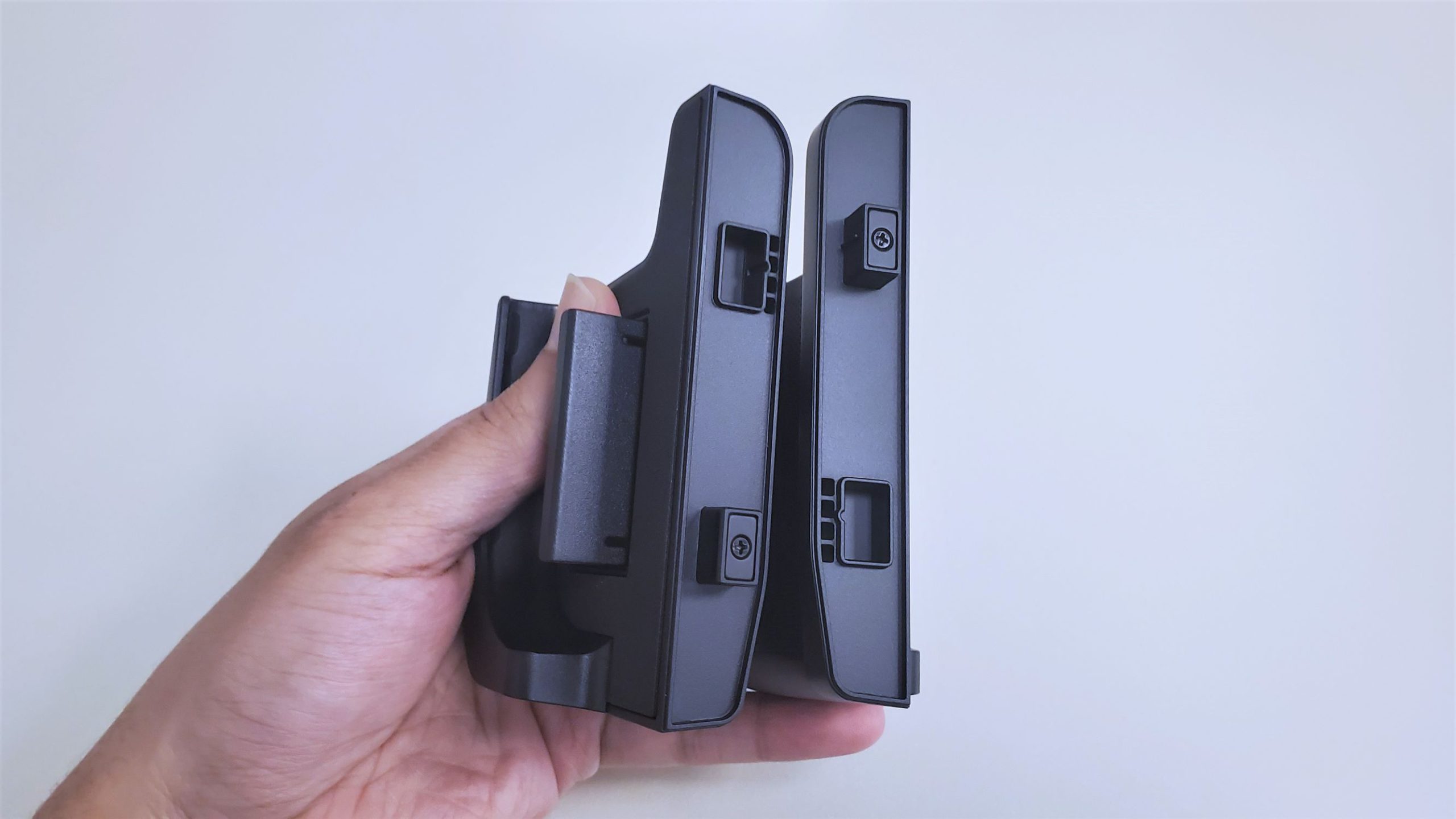 In handheld mode, the console and its attached Joy-Cons slide into the ChargePlay Clutch entirely. The console as a whole fits into the case quite snugly, leaving no room for the console to wiggle or slide about. In terms of protection, in this format you have solid protection for the console’s rear, bottom, and sides. 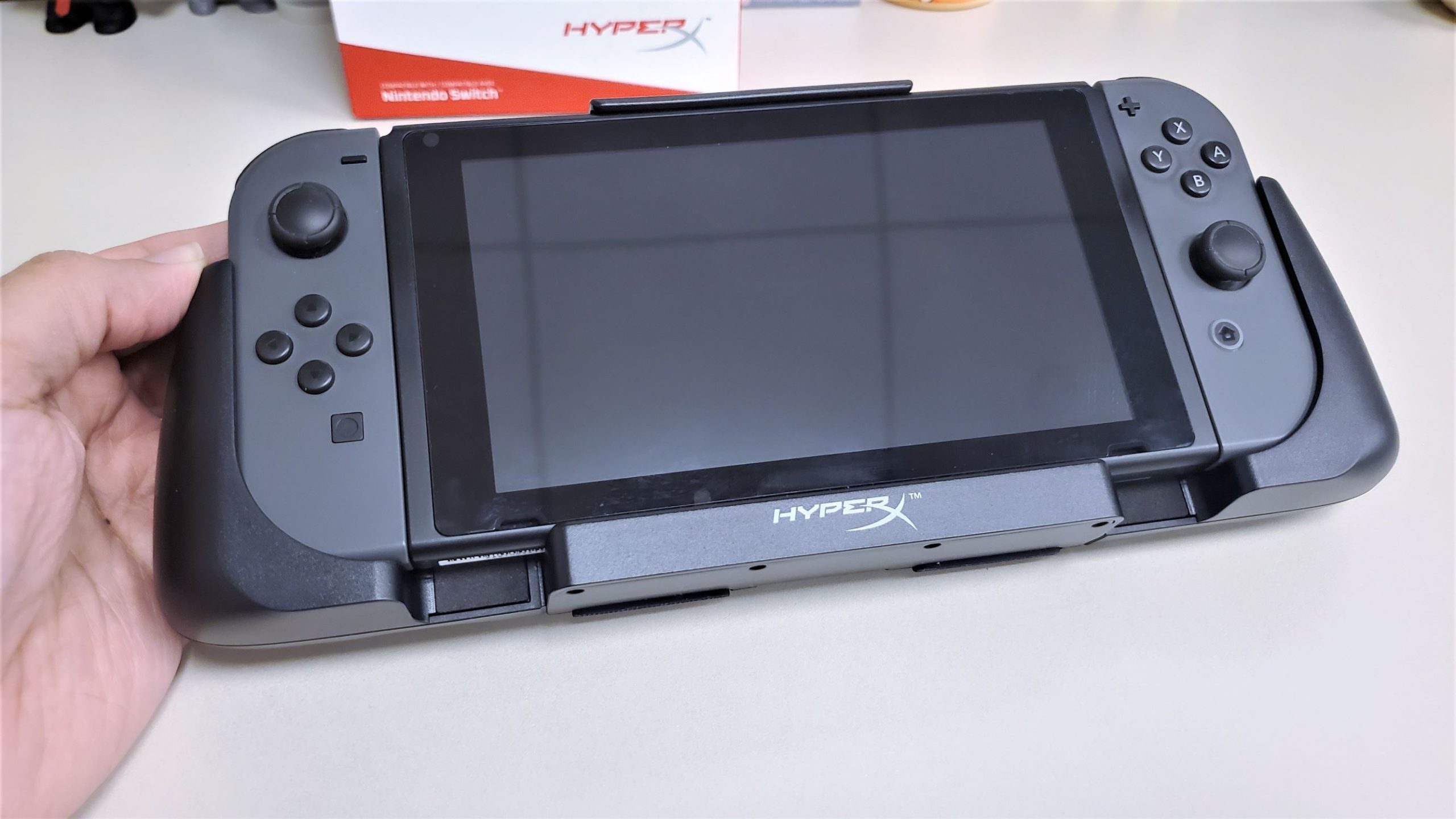 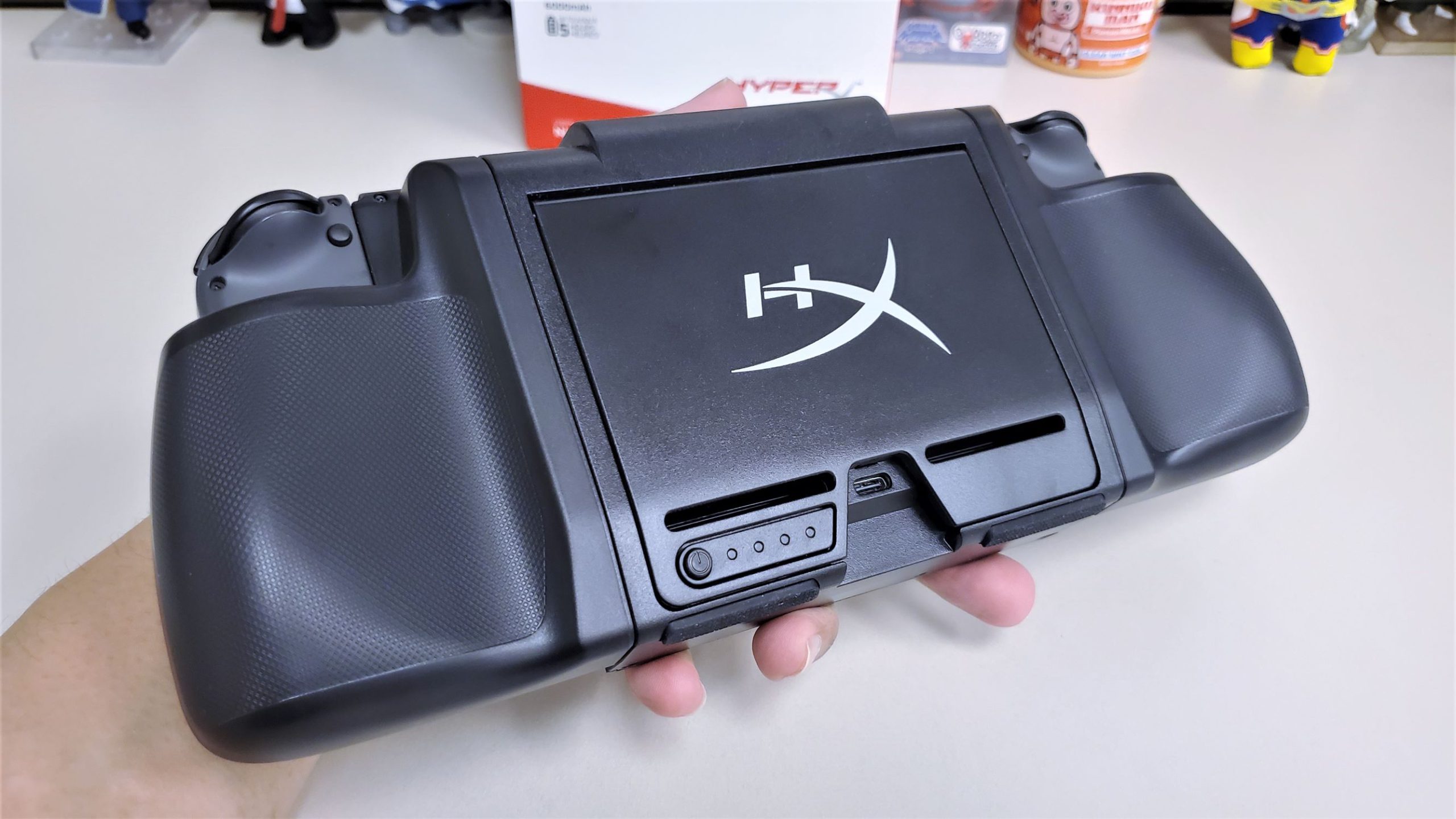 This is pretty par-for-the-course when it comes to protecting the Nintendo Switch. As I have seen in other Nintendo Switch cases, you cannot do too much to protect the console’s top corners without effecting access to the bumpers and triggers.

In tabletop mode, the ChargePlay Clutch’s battery base continues to hold onto the console’s center.

The case has an embedded kickstand that you can pull out from the back. You then remove each Joy-Con and slide them into each of the ChargePlay Clutch’s handles. The case’s handles feature tabs that swing out to grasp onto each individual Joy-Con. You then snap both handles together and you have yourself a standalone controller grip that you can hold in a more traditional console gaming fashion. 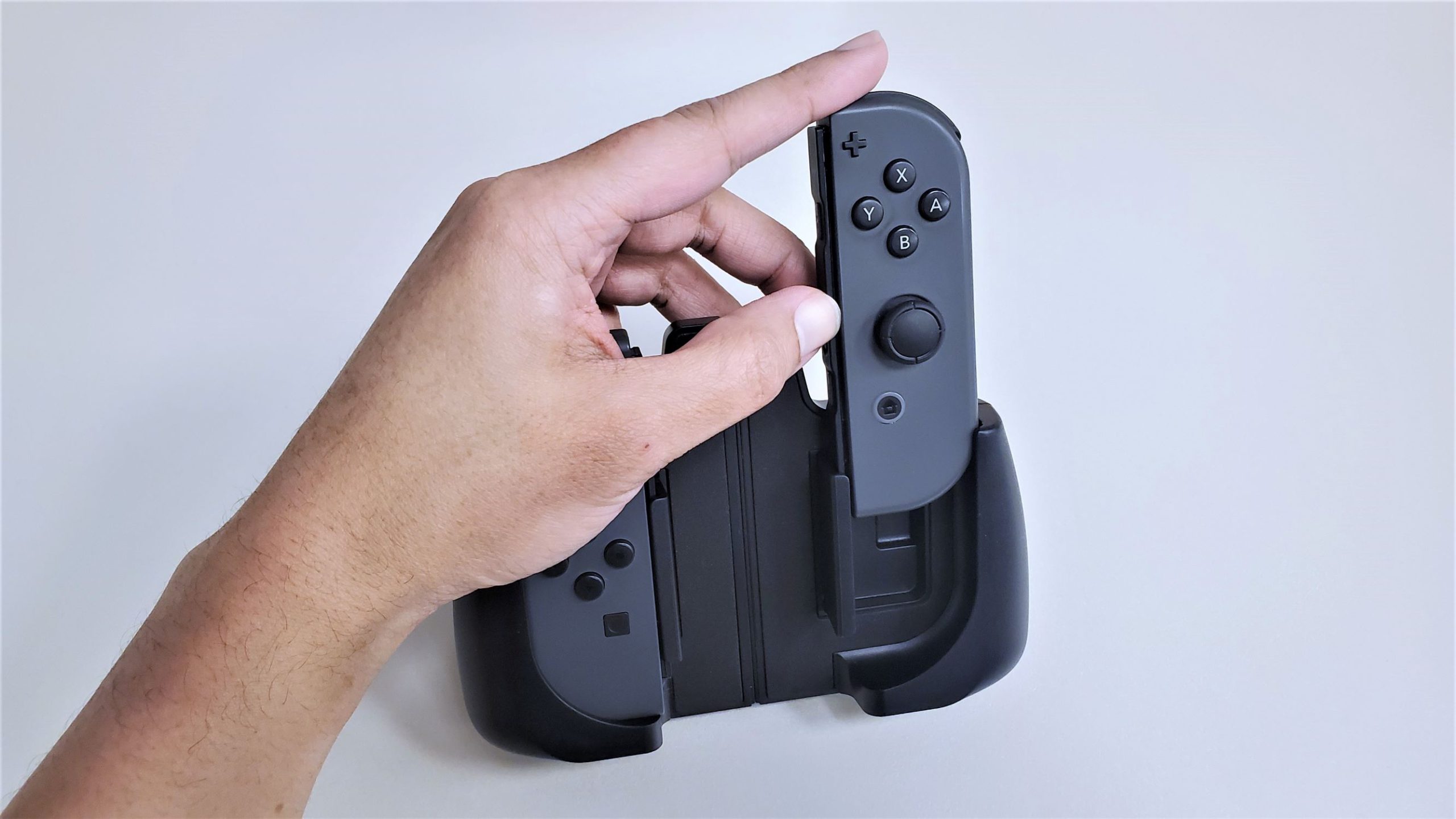 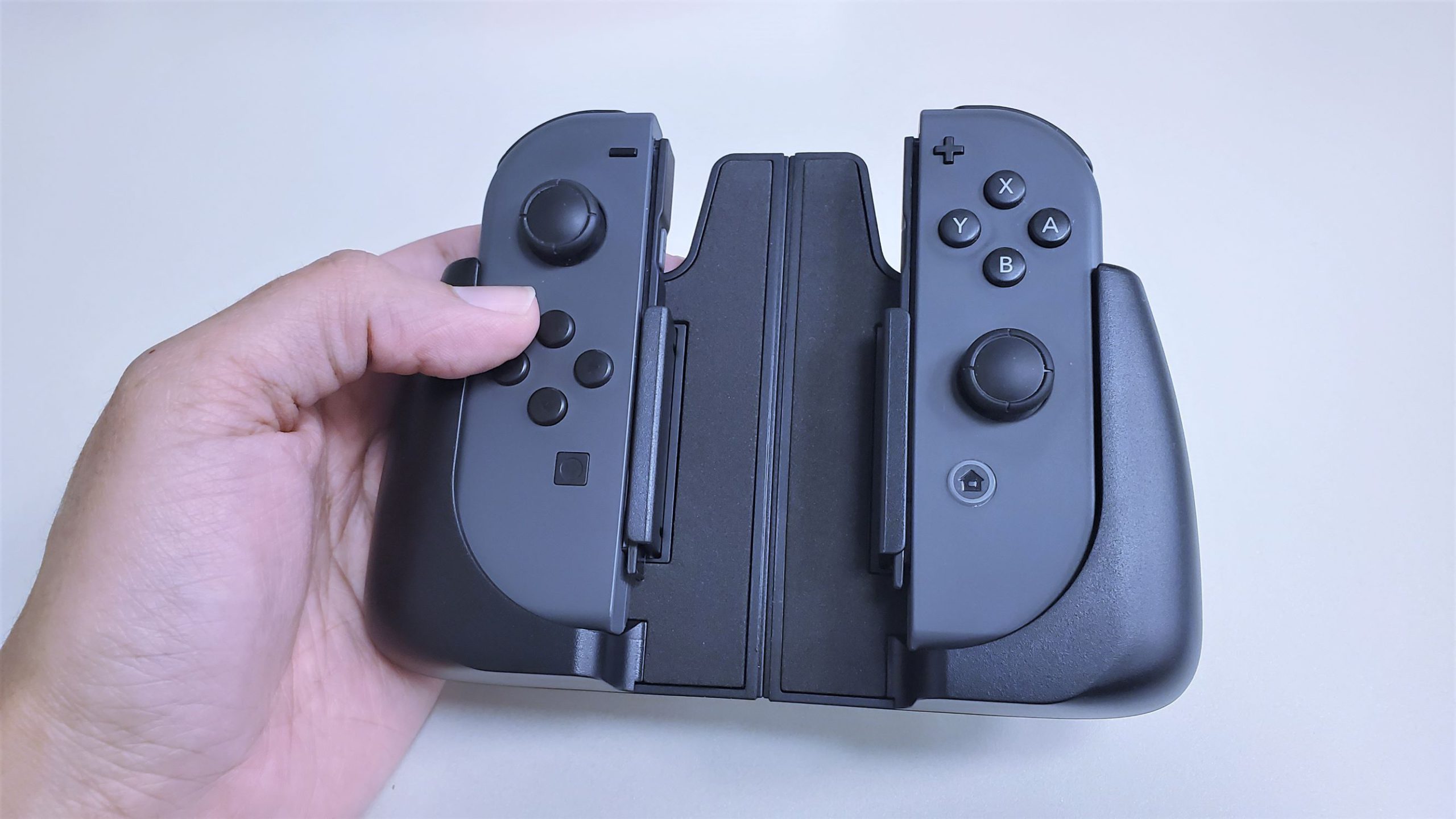 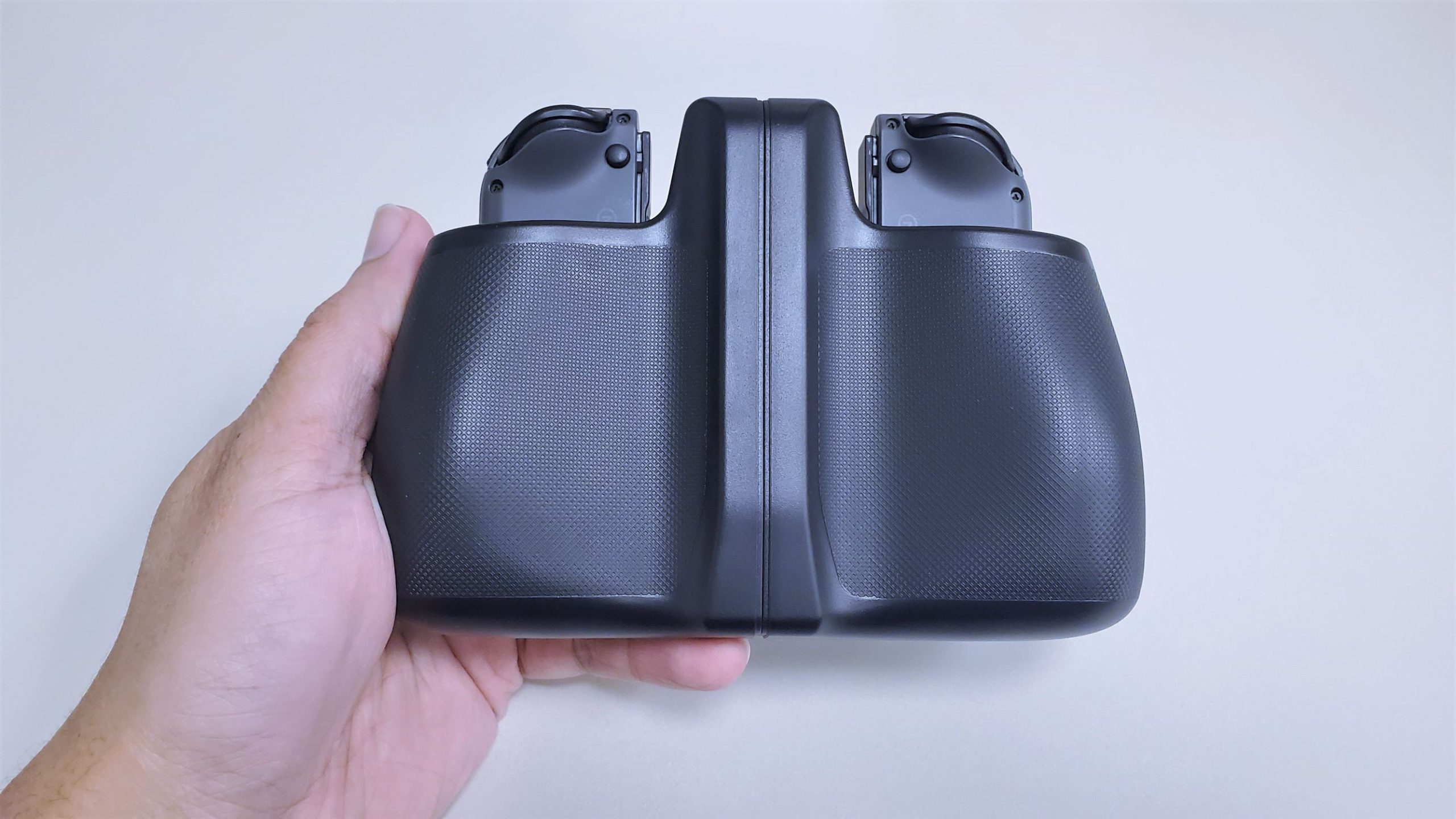 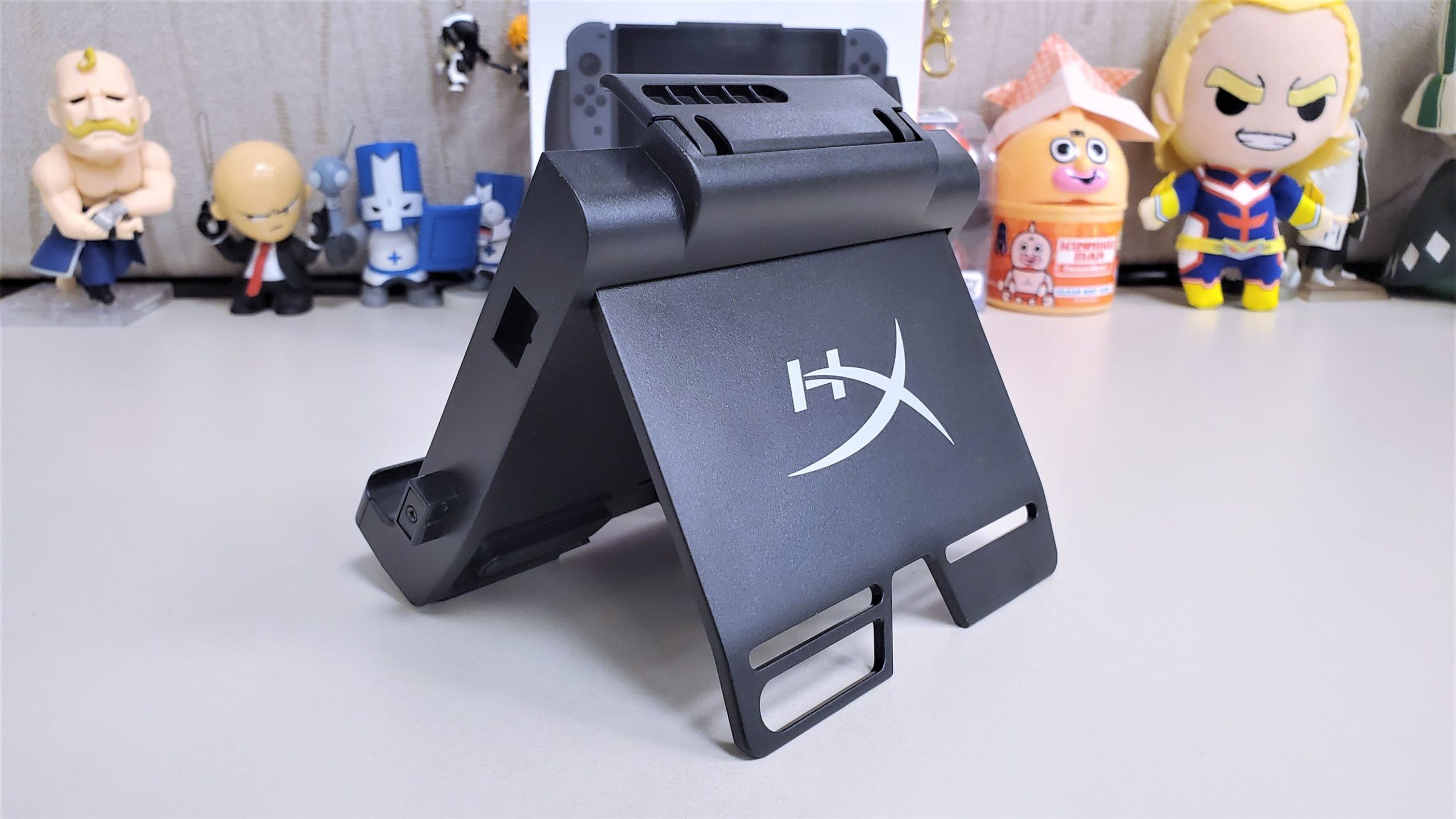 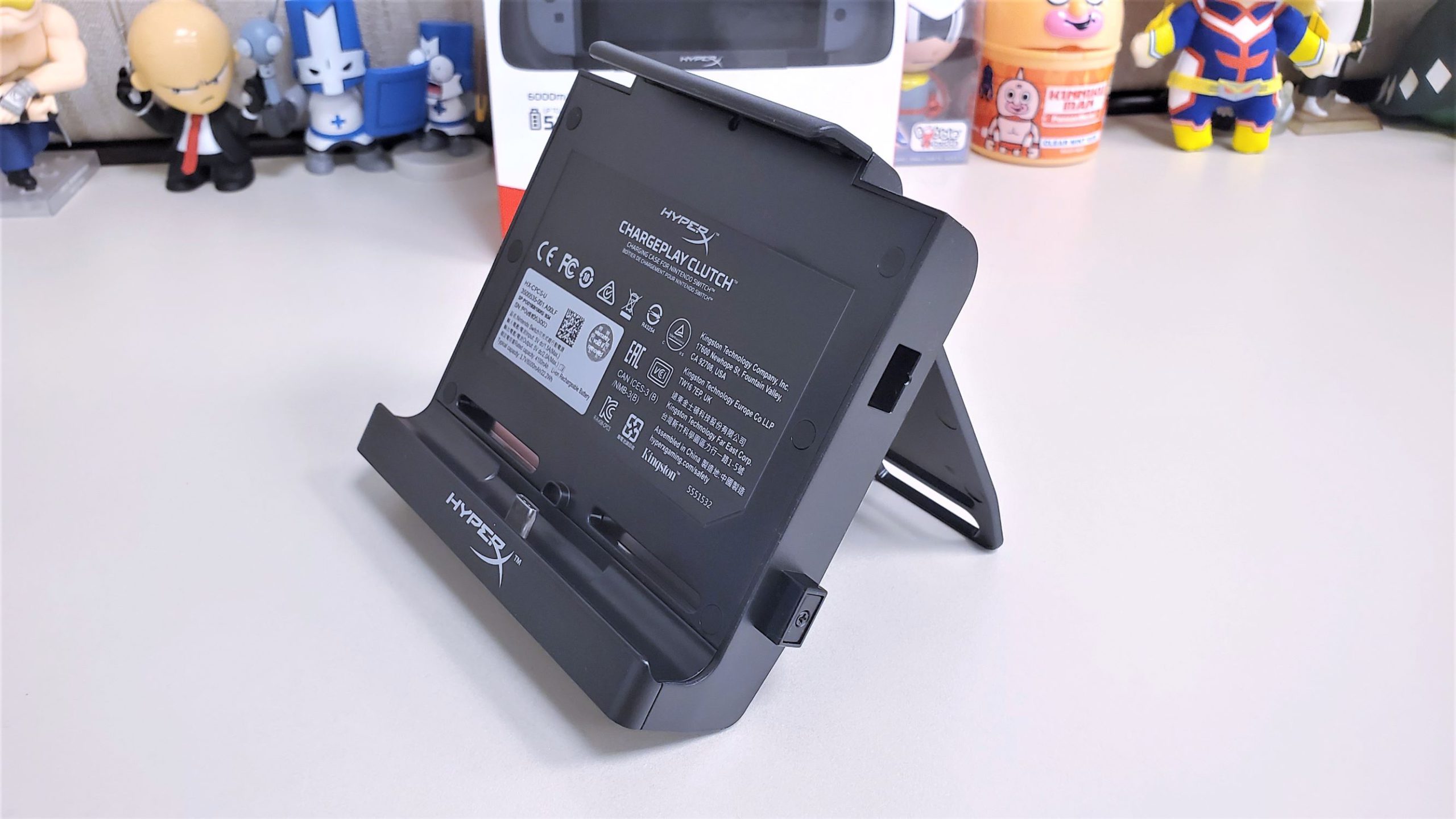 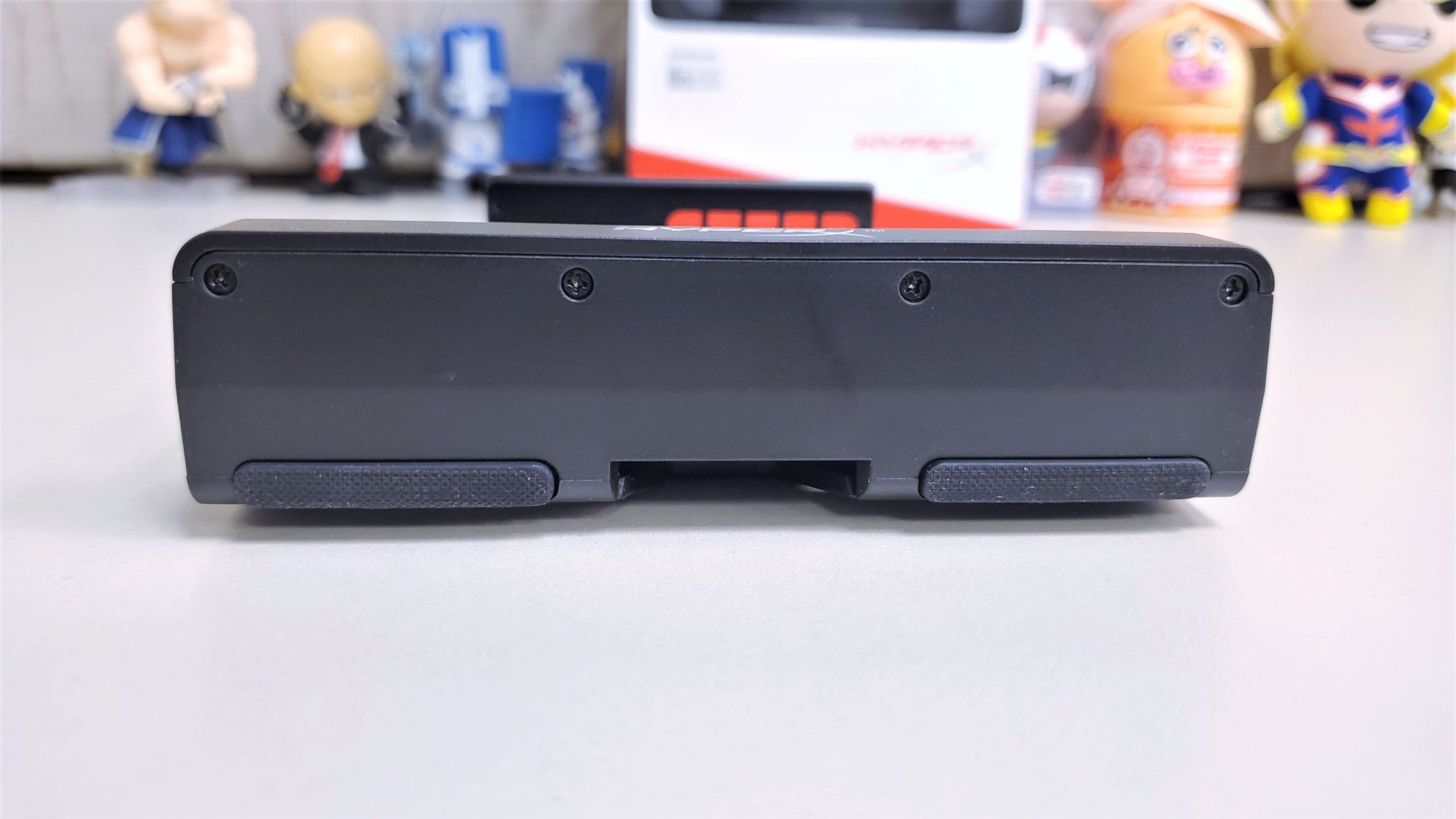 The HyperX ChargePlay Clutch for the Nintendo Switch is indeed bulky, as you can see for yourself. However, for the sake of comfort, that was not a bad thing. In both handheld and tabletop modes, I actually relished having more surface area to grasp onto. The perforated surfaces on each of the handles allowed for a secure and non-slip grip. This is despite those perforated surfaces being of plastic instead of something more rubber-y. I was ok with this. I would imagine that a rubber surface had a higher chance at making your hands warm than with plastic. So at least this approach is better for promoting a somewhat cooler handling experience than it could have had otherwise.

I very much enjoyed playing with the ChargePlay Clutch in tabletop mode as well. When I arranged the ChargePlay Clutch in the separated controller grip and stand orientation, I started to appreciate the ergonomics of the controller even more. The Joy-Cons sat securely in each side of the handles, remaining sturdy even in the most rigorous of Super Smash Bros. Ultimate matches. More importantly, the ChargePlay-contained Joy-Cons felt more comfortable to hold than they did with Nintendo’s out-of-the-box controller grip.

As for gameplay lifespan, your battery consumption is determined by how draining the game you are playing is. For our long-haul play session test, we looked into how long we could play Pokemon Sword & Shield, starting from a fully charged Nintendo Switch and ChargePlay Clutch. Starting at 7:30PM (Day 1), I started playing in handheld mode until the console complained about low battery. Once the low battery indicator showed up on screen, at around 10:35PM (Day 1), I then pressed the power button on the ChargePlay Clutch. So at least we know that the Nintendo Switch can last at about three straight hours with this game.

I then turned off the system and passed out. The next day, starting at around 11:30AM, I continued to play with the remaining battery life until the Nintendo Switch had drained down to 15 percent.

At $59.99, HyperX’s ChargePlay Clutch Charging Case for Nintendo Switch is a solid purchase for any heavy Switch gamer on the go. You have a solution that powers a Nintendo Switch for the duration of a flight from east to west coast in the US. More importantly, it is easier to hold than many of the battery-stand hybrid solutions out now, which simply attach a battery backpack of sorts to the center of your console. Those solutions would have you hanging onto a now-heavier Switch by its thin Joy-Con controllers. With the ChargePlay Clutch, the unit as a whole feels solid, while being bulky enough to grasp onto comfortably for long periods of gameplay.

† As usual, there are no affiliate links contained within this post. We were provided a HyperX ChargePlay Clutch for the Nintendo Switch for review purposes and were not compensated for this review.