The HyperX ChargePlay Clutch for Mobile can hold any mobile device within a size range of 129mm to 172mm. It houses a removable 3,000 mAh battery, which allows the ChargePlay Clutch to charge your phone while it sits in the grip. Whenever you want to engage wireless Qi charging, simply press the button on the battery and power will start to flow. You can even monitor the ChargePlay Clutch’s battery level using that four-LED indicator on the top.

If you happen to use a device that does not support wireless charging, you are not out of luck. You can also run a USB (A) to USB-C cable from the battery pack to your device to get some wired charging.

The handles on each side of the HyperX ChargePlay Clutch extend and retract independently. This allows you to perfectly position your device so that its wireless charging area lines up with that of the ChargePlay Clutch. 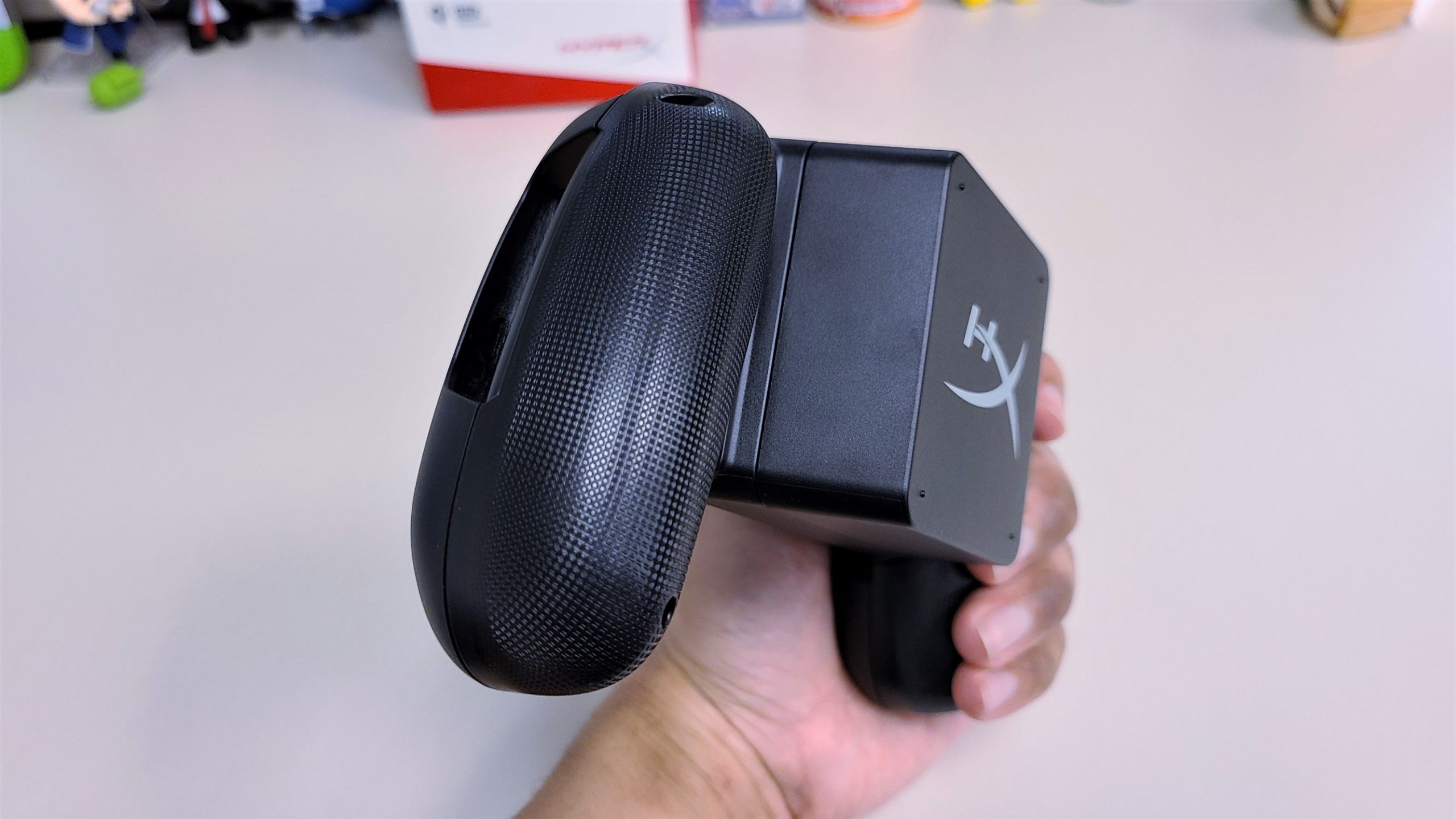 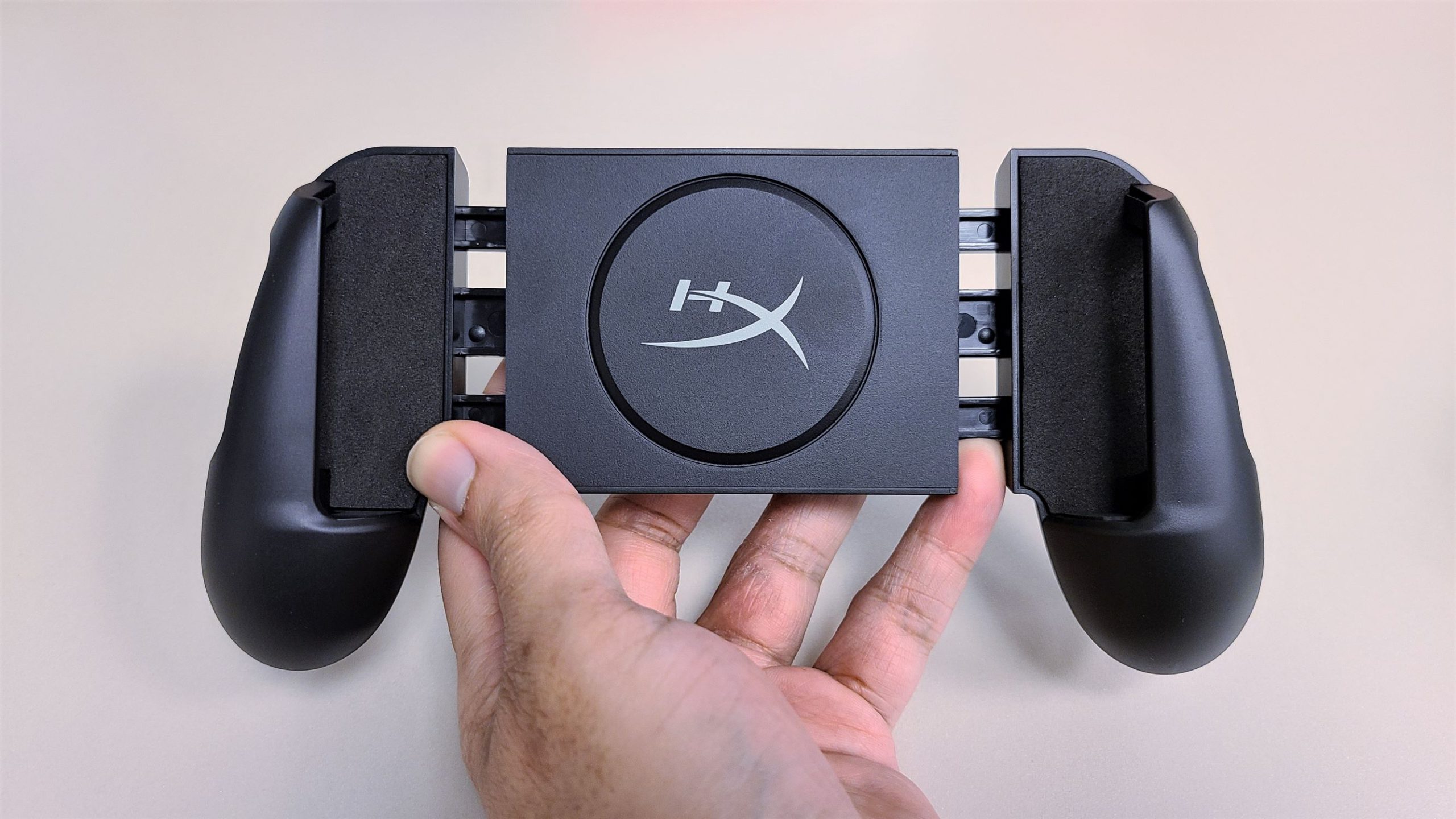 As for the battery, you can either charge it directly via a USB-C cable or pop it out and place it on a wireless charging surface of your choosing.

Off the bat, from a comfort standpoint, using the ChargePlay Clutch for Mobile immediately improved my gameplay ergonomics. Simply having handles to grasp onto felt noticeably more comfortable during gameplay than it does when holding onto a phone directly. The textured plastic surfaces on the grips allowed for a cool and secure grip throughout the longest of gaming sessions.

In terms of ease of use, reaching for onscreen touch controls felt natural for the most part. Games that had their buttons too close to the edge of the phone’s screen forced a minor learning curve when it came to handling the phone in the grips. However, it was not something that could not have been overcome over time with basic usage and muscle memory.

This was even less of an issue with games that let you move your touch controls around, of course. Overall, having the handles alone allowed me to focus more on the game and less on my phone handling during frantic gaming sessions.

A good example of this was Street Fighter IV Championship Edition for Android, which lets you set onscreen controls in a manner that perfectly jived with ChargePlay Clutch.

My current mobile gaming vice, King of Fighters ALLSTAR, played nicely as well. Those handles became even more welcomed as they let me focus more on tapping those noticeably smaller on-screen buttons accurately.

However, as much as I love my fighting games, I found the ChargePlay Clutch to flourish the most in first-person shooters. Playing Modern Combat 5 felt as comfortable as it could be without actually using a Bluetooth controller.

As far as charging went, I tossed the HyperX ChargePlay Clutch into two battery drainage scenarios. As a base, I always have my Samsung Galaxy S20 set to focus on smooth framerates over resolution, where the phone is kicking out a framerate of 120Hz. My phone’s screen brightness was set to a little less than the halfway point, which was plenty bright enough for the lighting scenarios that I mostly play in.

The entire time, my phone remained covered in a protective case, which was Qi wireless charge friendly.

In the end, I liked how the ChargePlay Clutch’s Qi Wireless charging performed in the two usage scenarios. Considering that the Samsung Galaxy S20 was running at full gear, graphically, 1 hour and 35 minutes was not a bad amount of added gameplay time. If you happen to play game in a less processing-intensive scenario than this, your added gameplay time would only increase from here.

During these troubling times, it is hard to imagine thinking of accessories for gaming on the go. However, while we continue to practice our social distancing, as we are doing here in New York City, it does not hurt to plan ahead for when we can inevitably go back out and about. When that time comes, you may want to take a look into the HyperX ChargePlay Clutch for Mobile if you are heavy into mobile gaming. It is a straightforward and effective mobile gaming accessory that keeps you gaming in comfort for those longer gaming sessions.

You can take a look into the HyperX ChargePlay Clutch for Mobile for yourself by clicking here.

† As usual, there are no affiliate links contained within this post. We were provided a HyperX ChargePlay Clutch for Mobile for review purposes and were not compensated for this review.